Commission on Judicial Disabilities and Tenure

The Commission reviews complaints concerning the misconduct of judges of the District of Columbia Court of Appeals and the Superior Court of the District of Columbia. Examples of judicial misconduct include but are not limited to the following: rude, abusive and improper treatment of lawyers, witnesses, jurors, court staff or others, showing bias toward anyone in the courtroom based on gender, race, ethnicity, religion, etc., and sleeping or drunkenness or other improper conduct while on the bench. Judicial misconduct also may include improper off-the-bench conduct such as: criminal behavior, improper use of a judge’s authority, publicly commenting on a pending or expected court case, communicating with only one party in a proceeding or court case unless permitted by law, and giving or receiving bribes or favors. 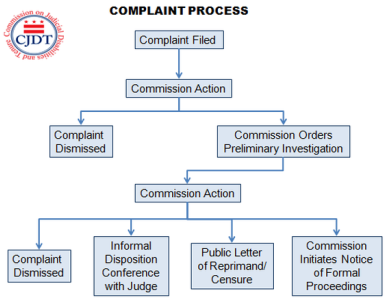 In considering claims of misconduct, the Commission looks to the American Bar Association Code of Judicial Conduct (2012) as adopted by the District of Columbia Joint Committee on Judicial Administration, along with the advisory opinions of the Committee on Codes of Conduct for US Judges, and the advisory opinions of the District of Columbia Courts’ Advisory Committee on Judicial Conduct. Judges under its jurisdiction are deemed to be on notice of the Commission’s published actions as well.

The Commission conducts its proceedings pursuant to Rules which appear in 28 District of Columbia Municipal Regulations Chapter 20, amended December 21, 2007.